Winning and Phyllis the Groundhog


I had the best start to February. Yes, Son1 turned 17...but that's not the good news, though his being potty-trained is pretty nice. ;)

On Friday, I received a large envelope from Children's Writer magazine. I'm a subscriber but I get the electronic edition now, and the snail mail version usually comes in a #10 envelope. And this envelope had a big "Do Not Bend" order written on it. I had no idea what I received.

This was what I found when I opened the package: 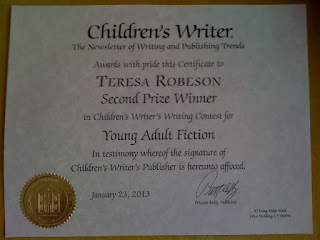 A merit certificate for winning 2nd place in their Young Adult Short Fiction contest which they ran in the Fall of 2012, a congratulatory letter, and, the icing on the cake, there was also a check for $250!

It's really nice to get validation like this every once in a while, because it's hard being a writer. Unless you're Stephen King, you're more likely to get rejections than acceptances. Most days, I'm more discouraged than upbeat about the process. But, when you have a story, or two, or fifty, fighting to get out, you can't stop even when rejections pile high and outnumber acceptances 1,000 to 1.

While we're on the topic of writing, talented children's lit writer Susanna Hill sent forth her groundhog friend Phyllis to have her own Groundhog Day fun. So did Phyllis see her shadow at my house in southern Indiana?

Well, the day was sunny but frigid (highs in the low 20s Fahrenheit), and Phyllis isn't dumb. She wasn't about to venture out and have her breath freeze on her cute little nose. When I finally found Phyllis, she was hiding in my yarn stash, playing dress-up with my sparkly yarn. That little stinker! ;) 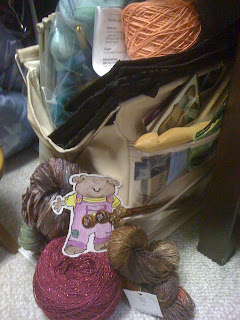 I don't know about spring, but Phyllis did say that the prognosis of an early knitting project is very good!

"I may not have gone where I intended to go, but I think I have ended up where I needed to be." ~ Douglas Adams
Posted by Teresa Robeson at 9:00 AM